There are so many things I should be doing right now (most importantly, preparing for the Mother’s Day brunch I found out I was hosting several days ago), but making fun of Brent on my blog sounded like way more fun. ☺

First, I need to start by saying we have letters in our grass.

That’s right, our backyard is saying “oh.” And what caused these awesome dirt patches? 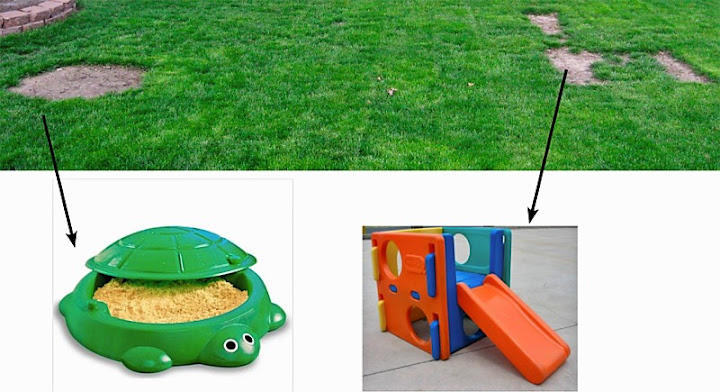 (So any parents out there with these gadgets in your yard – please make sure your soon-to-be-dead-spots are saying “oh” rather than “ho.” Nothing is worse than a verbally abusive yard).

Now on to the Brent part…

Last weekend he decided to put sod over the letters. So now our yard looks like this:

So what exactly happened, might you ask? Brent bought the sod that way. That’s right. He bought dead sod.

See the happy sod on the “o” and the top of the “h” – that’s the sod Brent and I bought together. When he realized we didn’t have enough, he went to a different store and noticed the only thing available was the dead sod. So did he find this unacceptable and go to a different garden center (such as the one we went to several hours earlier), nope, he bought the dead sod.

I’m not quite sure what face I made when I saw this gem, but I’m sure it was a special one. He tried telling me that while the sod is dying, it will be fine with water. It’s now been a week, and while the good sod is becoming greener, the dead sod is maintaining the brown look.

I’m pretty sure Brent is about to the point of saying I was right. What can I say – he always keeps me entertained.
Posted by Ashley @ Decorating Obsessed at 4:54 PM