Our second annual beer-tasting party was a success (and yes, beer party: the trilogy is already in the works for next year).

The guest count was a lot smaller this year, which I was originally nervous about, but I have since decided that 30-40 people is a fabulous size. It let me socialize with everyone. The 70-80 people we had last year was, well, a lot.

Since I kept a lot of things the same, I didn't take as many pictures, but here's the overview...

The save the date: 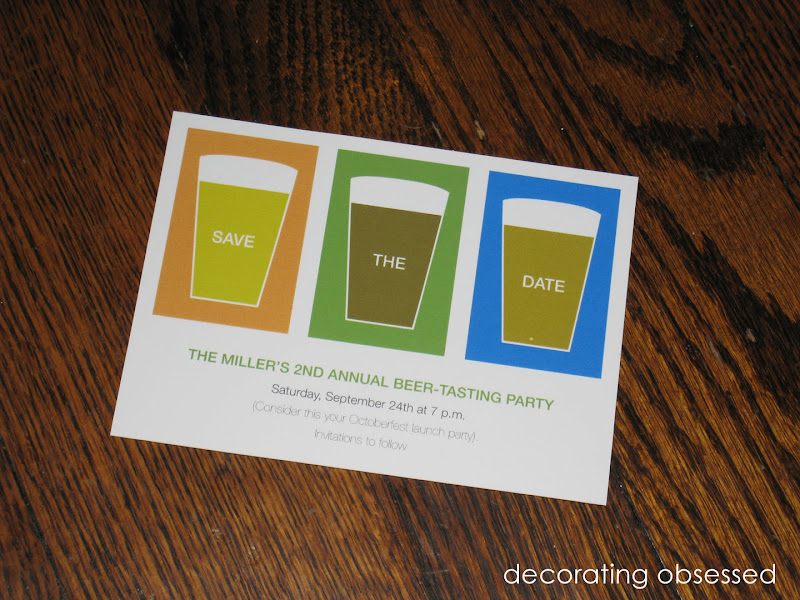 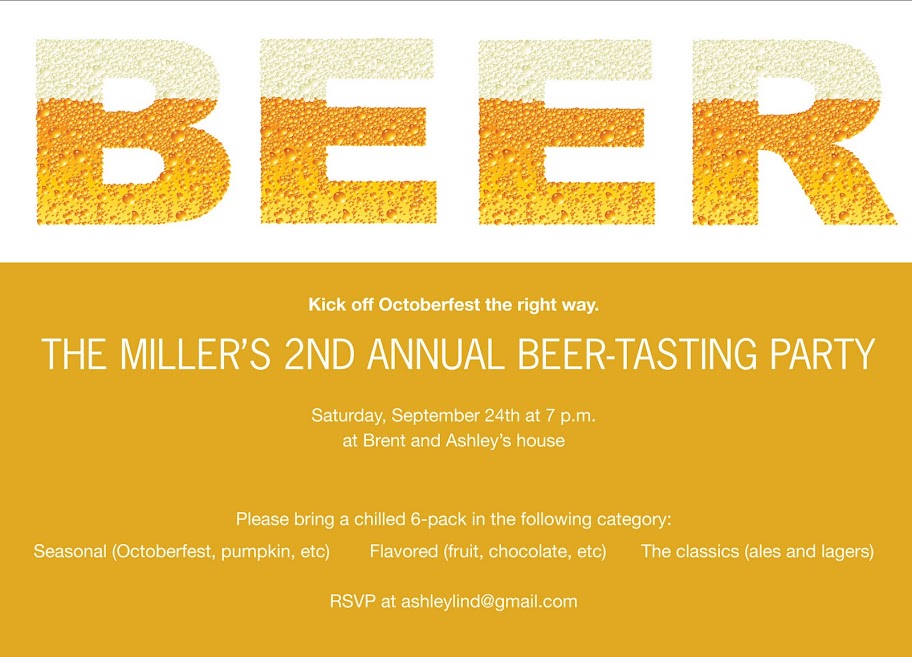 We still had the sign (picture from last year): 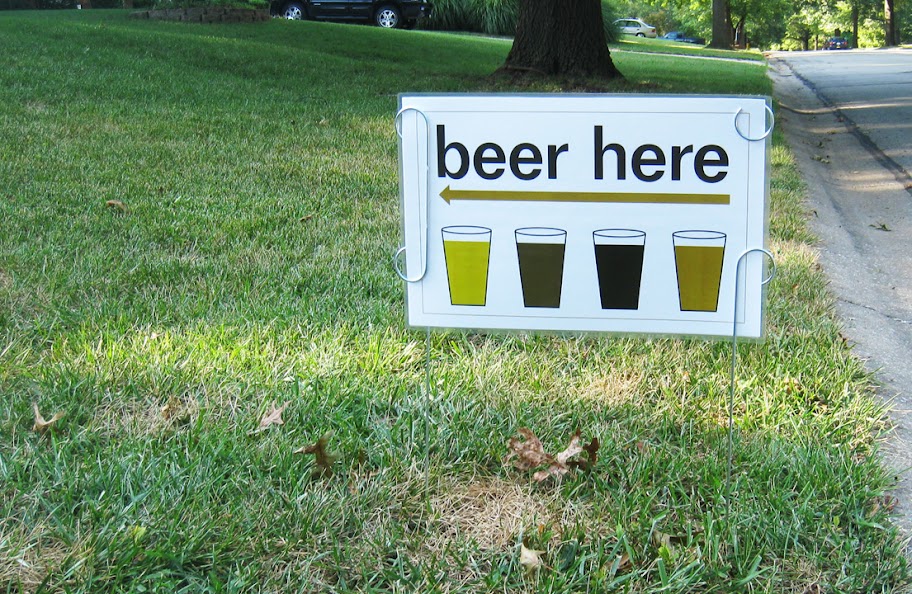 As well as the beer-tasting notepads (picture from the first party): 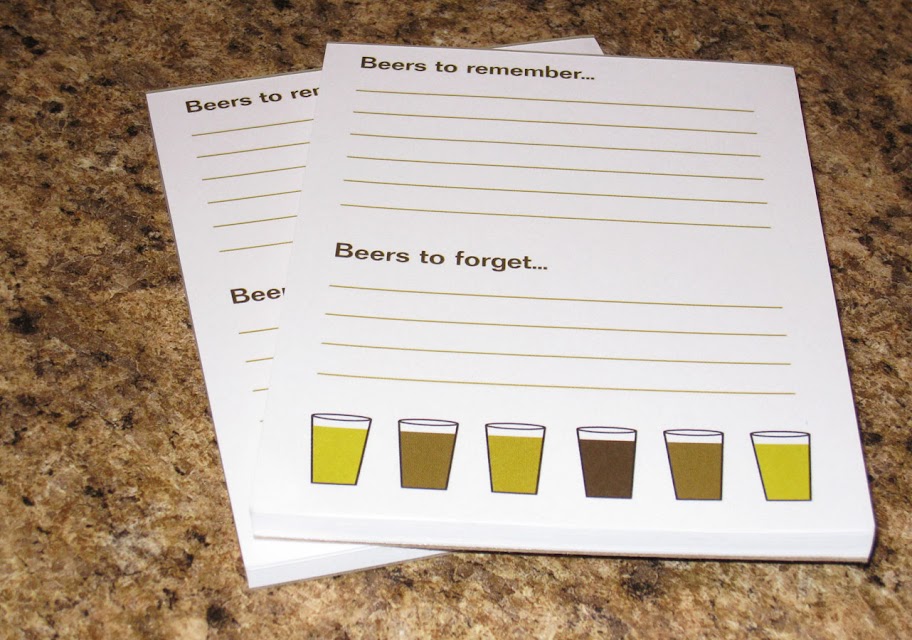 I also used the same food label design, but had a slightly different menu: 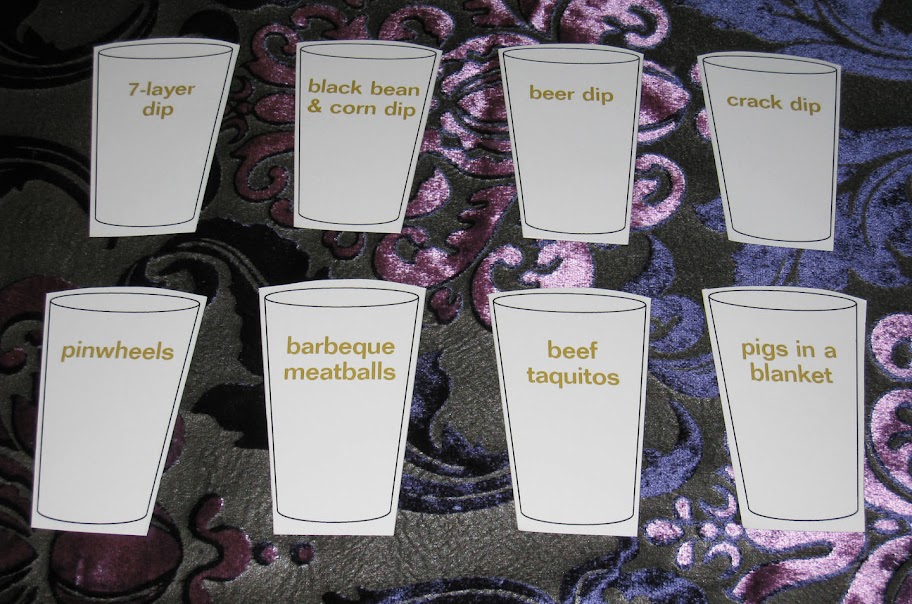 The pigs in a blanket were a game-time decision. I woke up from my power nap 3 hours before the party and decided I needed lil' smokies like it was my job. My father-in-law was nice enough to honor my craving and make a grocery store run for them and crescent rolls.

We also had a snack bar downstairs: 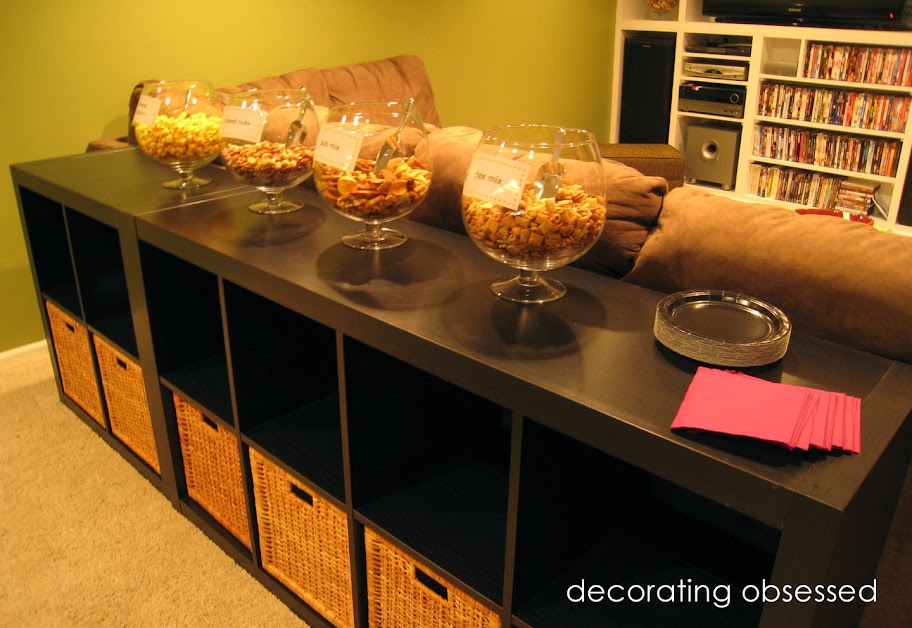 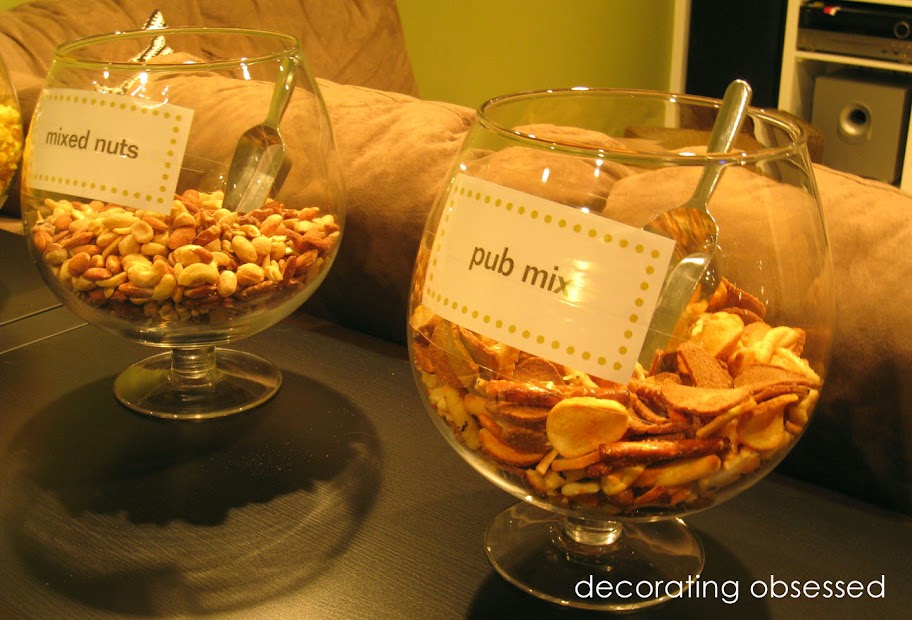 Because of pregnancy exhaustion and not taking off of work the day before the party, I decided to tone a few things down – one of them being the snack bar. I went with 4 snacks instead of 5, and cut the one that takes me the most time – the spicy nuts. This, of course meant I had several people asking if I made them again this year. Sigh.

The beer
Like last year, we had 3 stations. Last year, we were newbies and kept with the basics: ales, lagers and darks. This year, we went more specific and took advantage of Octoberfest with flavored, seasonals and classics.

We had each station scattered throughout the house (living room, kitchen and man cave) to help with the flow. 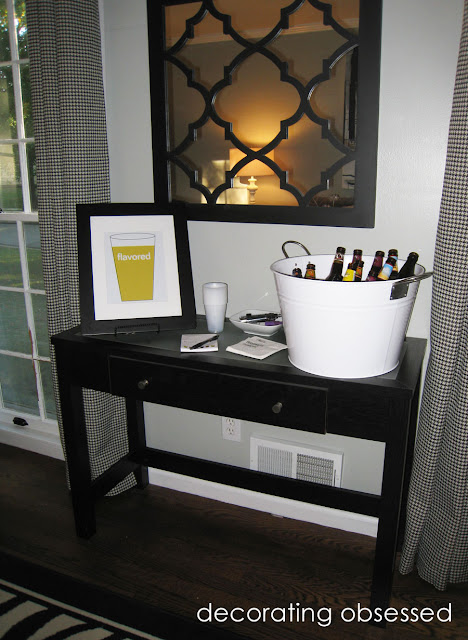 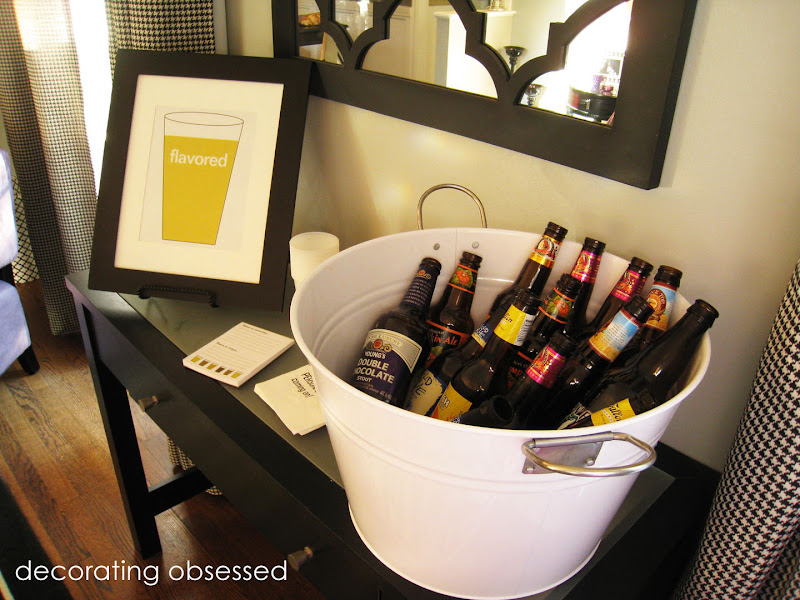 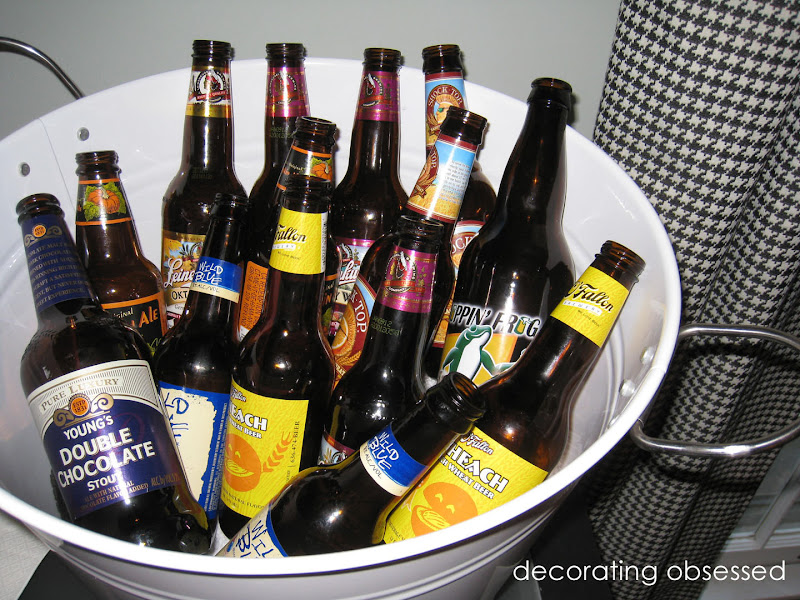 The napkins weren't as awesome as last years. But considering this party wasn't in honor of Brent, I figured a napkin discussing Brent's probable hangover the next day wasn't ideal. 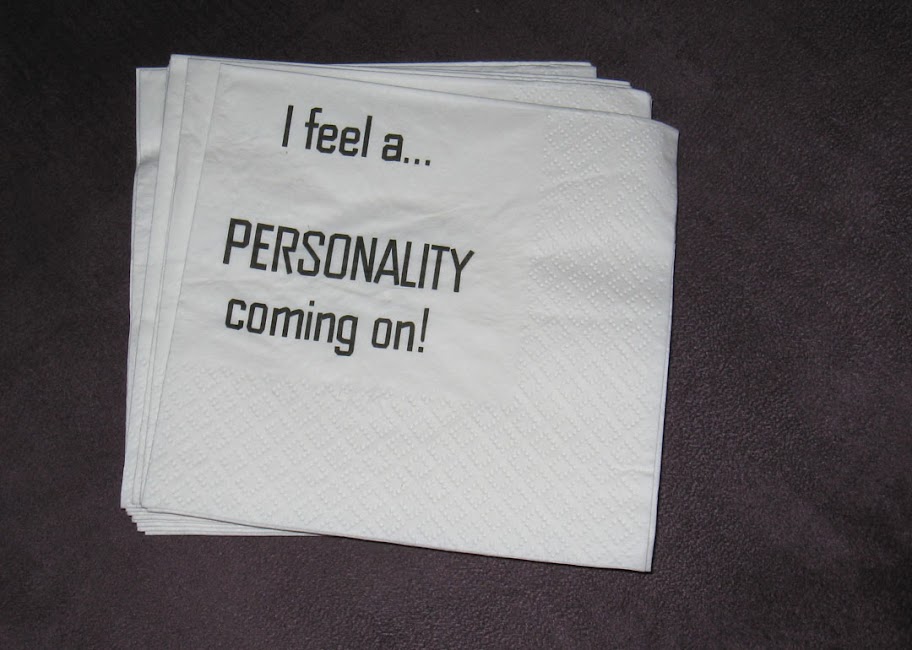 (In retrospect, Brent did have a massive hangover the following morning, so those napkins would have been extremely appropriate). 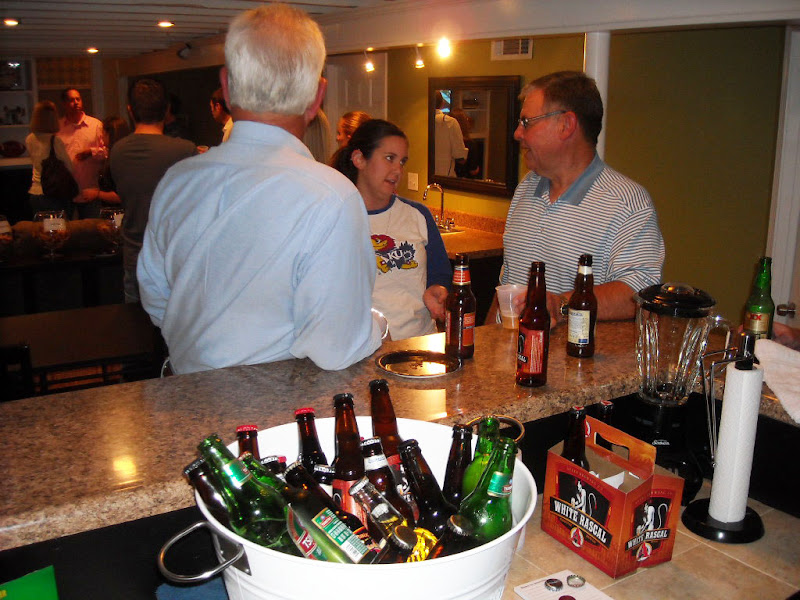 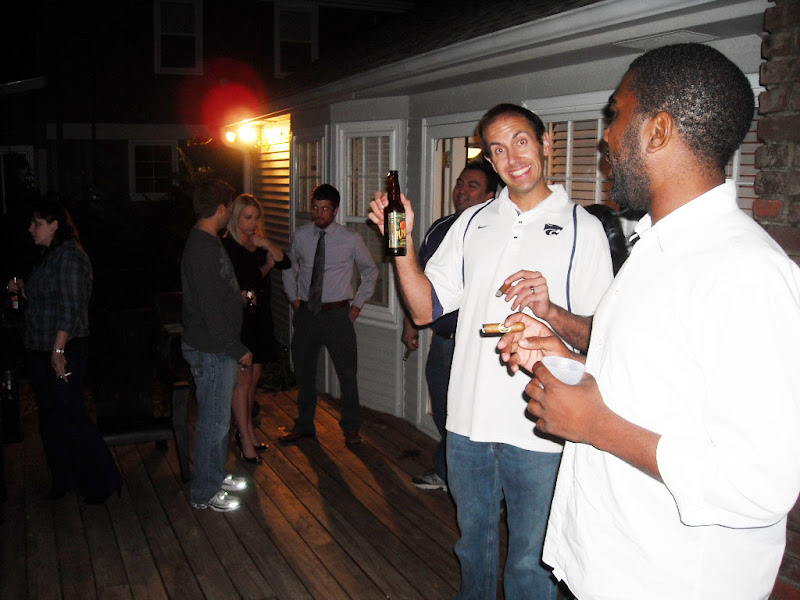 And yes, we did have beer on tap this year as well. But it's main function served as some weird drinking game involving holding a pitcher of beer. I didn't ask questions, I just went back upstairs after witnessing a few minutes of craziness. 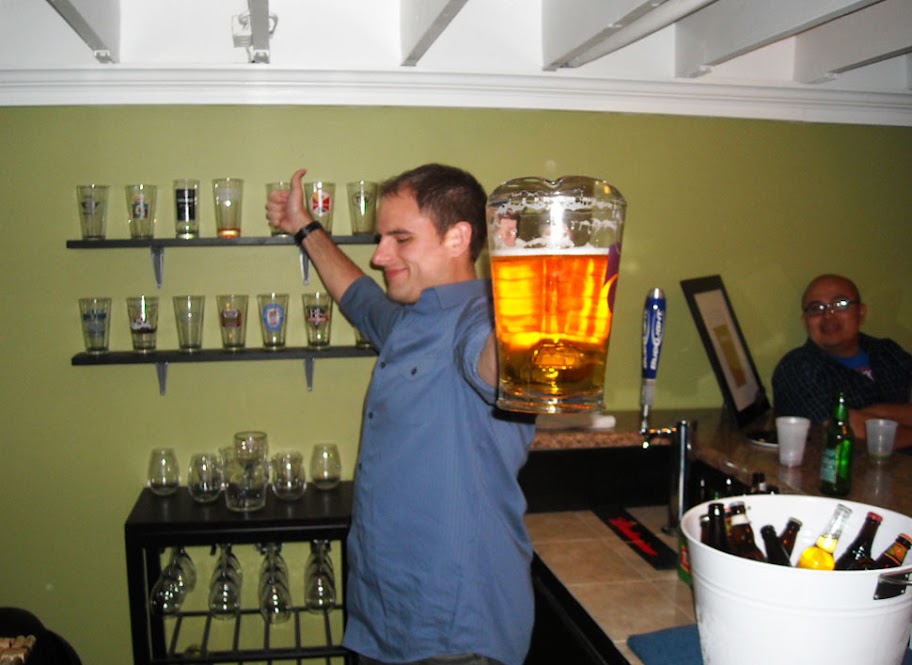 We had a huge variety of beer. The weirdest one being a seaweed beer. I had no idea that sort of thing even existed.

And since this is an annual event, Brent and I are toying with making a wall of shame and keeping track of who brought the worst beer each year. My dad won that honor at last year's party, and people were still making Vanilla Porter a year later. Yep, that beer was that bad.

I'll admit, watching everyone try my favorite pumpkin beer (O'Fallens Pumpkin Ale – seriously, try it – it tastes like pumpkin pie), was a tad difficult. But one of my friends brought me a build your own 6-pack of flavored ciders, so I got to have my own tasting (and feel cool holding a bottle). It was the sweetest thing ever. 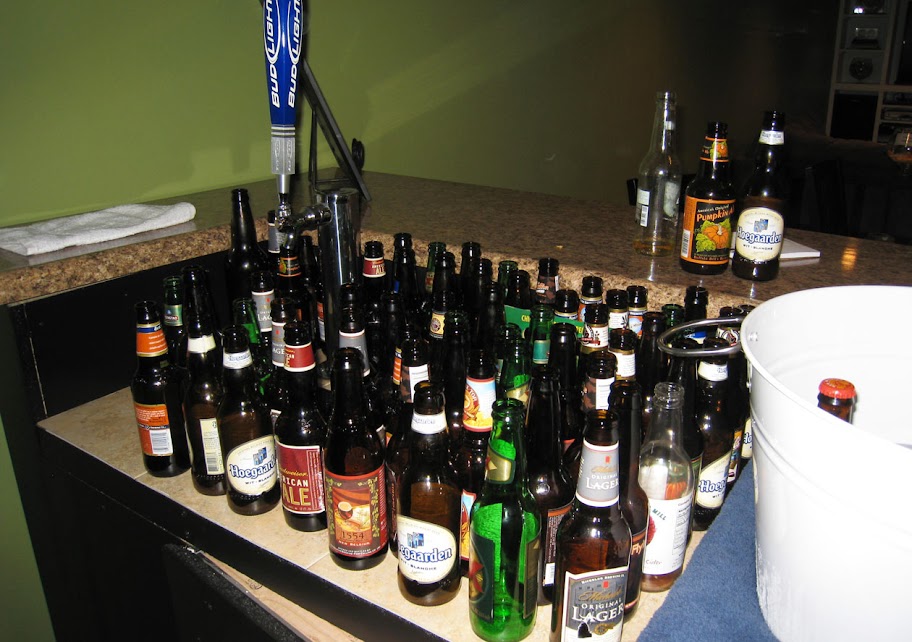 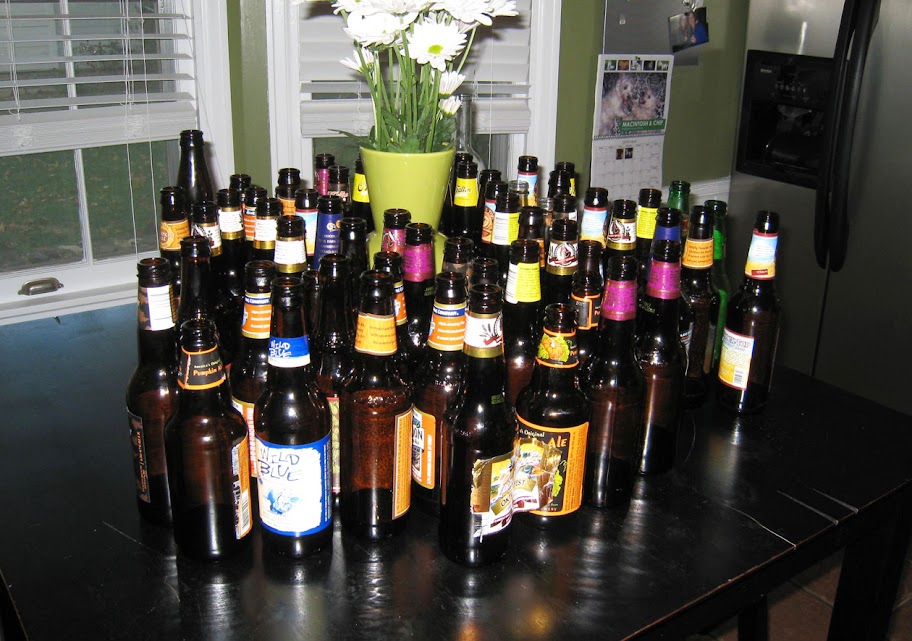 And now our garage smells like beer, but it was totally worth it...even though I didn't get to partake in the beer fun.

For details and pictures of the first beer party, click here.

When Brent and I found out we were having a girl, we celebrated by hitting up the baby sale at Gymboree and buying a few must-have pieces. 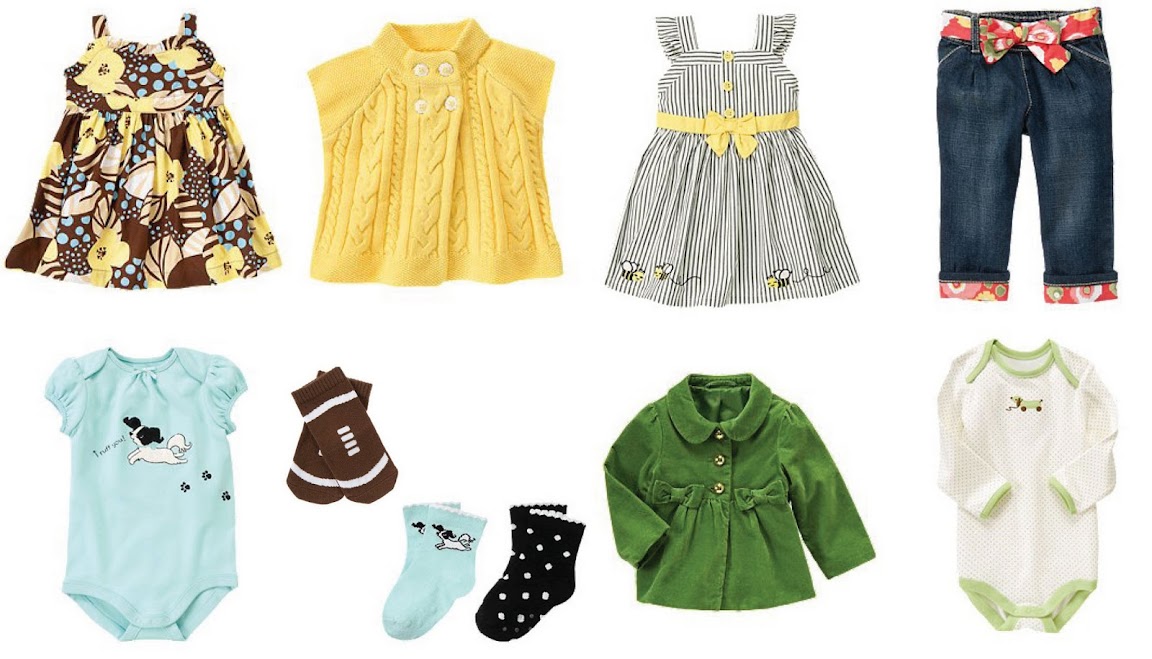 When my mom found out we were having a girl, she did the same thing, just on a whole new level. 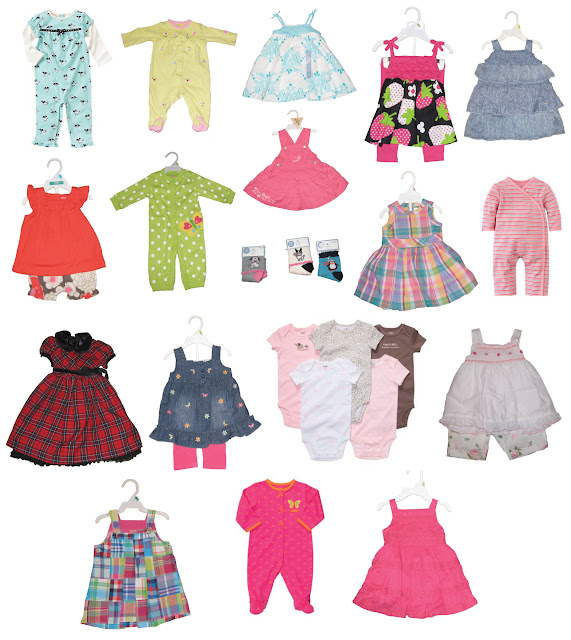 Yeah, my mom is just a tad excited. When I confronted my mom last year about Brent and I having issues in the fertility department, she got a little ahead of herself and starting purchasing clothes when a sale was too good to pass up. (For those wondering about the risky gamble she took by purchasing girl clothing, let's just say there's baby boy clothing stashed in her house somewhere).

And for those who noticed the title of this post, that's right, we have a name – Audrey Elizabeth. :)
Posted by Ashley @ Decorating Obsessed at 5:07 PM 6 comments:

I knew I wanted a focal wall in the nursery, and after much debate – I'm going with this: 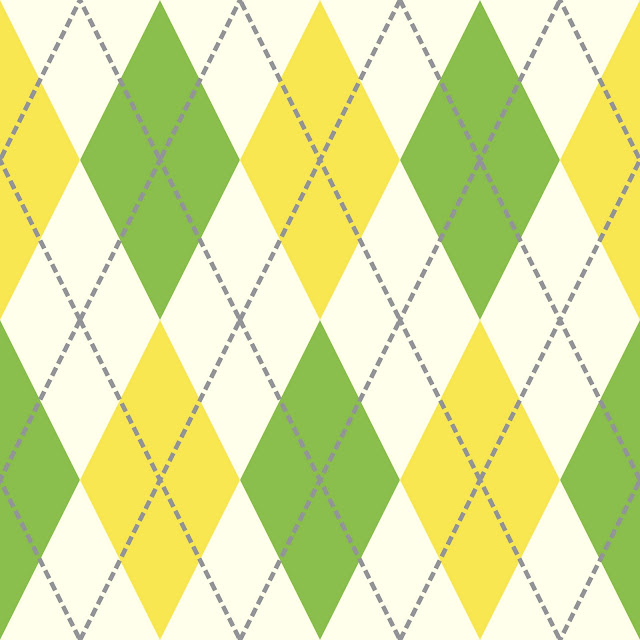 Hello argyle! I am so excited. And yes, those are the nursery colors. Black will also be added to the mix, but every time I added it into the argyle it looked to harsh. So I'll toss it in elsewhere.

I'm not exactly sure how one goes about creating an argyle wall, but that's an issue for my dear husband to figure out. I see lots of measuring and creative language in his future.

In other news: Beer party, the sequel, is this weekend! It feels so weird, because well, I've basically done nothing for it. I still have so much leftover from last year's party, that it didn't make sense spending money on making it different. There will be one big difference for this year's party though, I will be sober. Being around all the fabulous pumpkin beer will be a challenge. I wonder if my guests will get weird out if I start sniffing the beer?
Posted by Ashley @ Decorating Obsessed at 12:41 PM 5 comments: 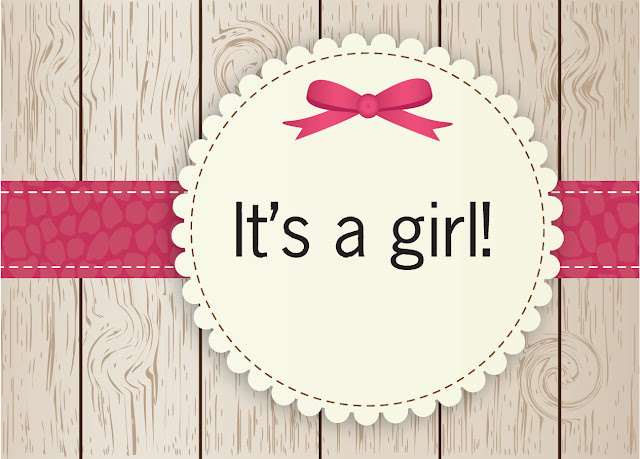 Me: I had the weirdest dreams last night.

Brent (giving me a nervous look of where I was going with this, after hearing about another recent dream)

Me: I put in my retainer.

Brent: That is weird.

Me: Hey! I do that occasionally! Anyway, in my dream, when I took it out – half my teeth came out with it, including my 2 front teeth. It was very embarrassing, and I made you call Doctor Gardner.

Brent: Maybe that's a sign you should floss more.

Me: We're taking queues from my dreams now? The night before one of my dreams involved our house running out of oxygen and us having to go outside whenever we wanted to breathe. What moral can you find in that dream?

Brent: That maybe I should stop farting in the house.

It finally happened. Brent got a new car. 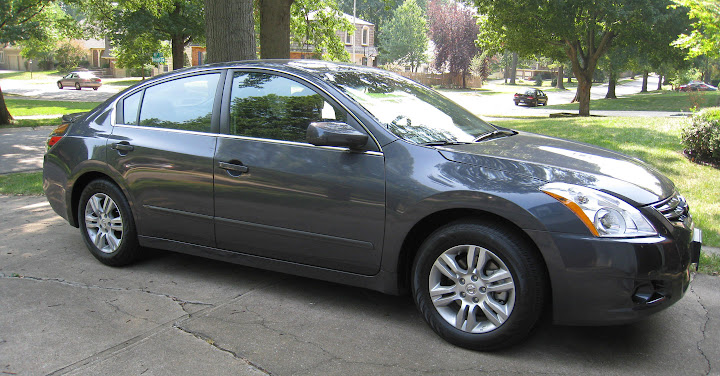 The game plan changed several times, but we eventually settled on a 2012 Altima. While the original plan was to go used, with all the amazing deals going on currently with new cars, it didn't make financial sense not going new.

One of the musts on Brent's wish list was heated leather seats. We saved lots of money by purchasing a grade down from the "pimped out" line, and just having the dealership switch out the fabric seats with leather ones. 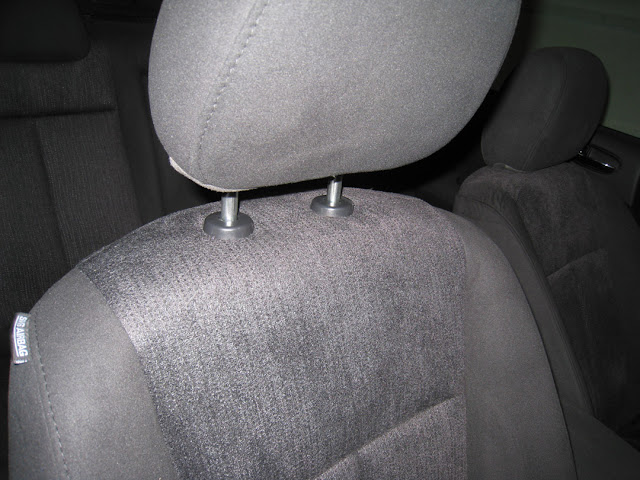 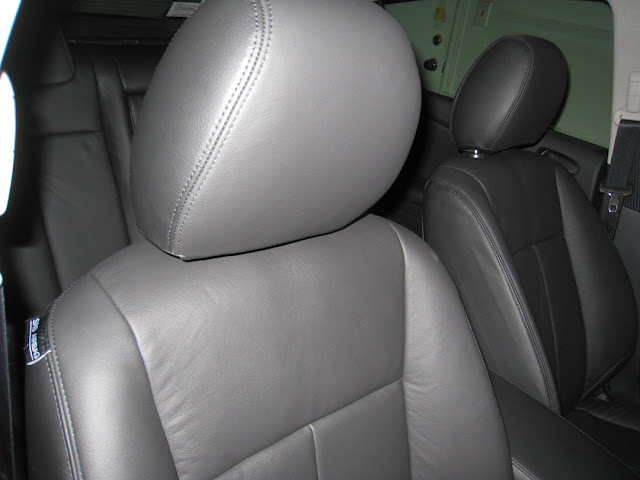 They did an amazing job and this task took less than a day. Even the door fabric was switched out to leather. As for the price of a task like this, we were originally quote $1,900, but Brent was able to talk them down to $1,100. Not bad at all for a toasty butt in the winter. :)

In other news: I may or may not have downloaded the song from the Weber Grill commercials. And I might be rocking out to it right now.
Posted by Ashley @ Decorating Obsessed at 12:14 PM 1 comment: