Today sucked. That's really the only way to explain it. 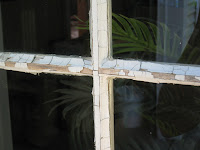 When Brent and I bought our house in March 2006, one of the first things we planned to do was fix the white-trash-window situation we had going on. Three years later, we just now started getting around to it (nothing like the pace of leisure).

Today, we were outside in the Kansas heat from 9 to 5 scrapping, sanding and priming. We got more done today than I expected, especially with the hold ups. (Brent bought a non-paintable caulking, so when we noticed the primer bubbling up, he got the pleasure of re-scrapping that entire window. I don't think I've heard him say "God damnit" that many times in one day – especially when he knicked a window pane...twice).

Three out of the 4 windows have been primed. We took tomorrow off, and are hoping to have everything finished. At least the worst is done, well, aside from the fact that it's supposed to be 100 degrees tomorrow – there is nothing okay about that.

In other news 2: I definitely managed to smack my face into a door frame earlier today – I had an instant bump on my forehead. I literally saw stars, and it scared the crap out of me. I blame my cordination issues on too much sun today.
Posted by Ashley @ Decorating Obsessed at 9:31 PM No comments:

So I love this style of end table from Crate & Barrel. Unfortunately, they only offer it in this espresso color, and I am not paying $199 for an end table I will end up having to paint.

After several months of searching, I think I found a great substitute from the C&B table that is not only in black, but is a fraction of the price. Believe it or not, this end table is actually from Wal-Mart and it's on sale for $49.38. Now that is a price I definitely approve of.
Posted by Ashley @ Decorating Obsessed at 12:42 PM No comments:

Brent and I are trying to find a happy medium. We are trying to stage our home in a way that tones down our personality without losing it completely. We are walking a fine line, but I think are succeeding so far.

Last week we fell in love with a house. It was in the neighborhood we wanted, had a finished basement, a spacious main floor – it was perfect. The issue is that our house isn't market ready yet, so we are trying to kick it into high gear, and make this happen. The dream house is being sold by owner, so hopefully that will make it take longer to sell. While we don't truly believe we can get our house ready quickly and then sold on the market before the other house does, all we can do is try.

If the other house sells before ours reaches the market, we will continue getting ours ready but at a more leisurely pace. And maybe even be able to enjoy some of the work we've done so far.
Posted by Ashley @ Decorating Obsessed at 10:55 AM No comments: