I can safely say that my mom's birthday party was a success. As you'll be able to see from the photos, I kept it a similar format to the beer-tasting party – after all, if it ain't broke...

My reasoning for sticking with white wines was a simple one –

Well that, and that my mom prefers whites. But mainly the first reason.

Now, on to the fun stuff!

SAVE THE DATES AND INVITES 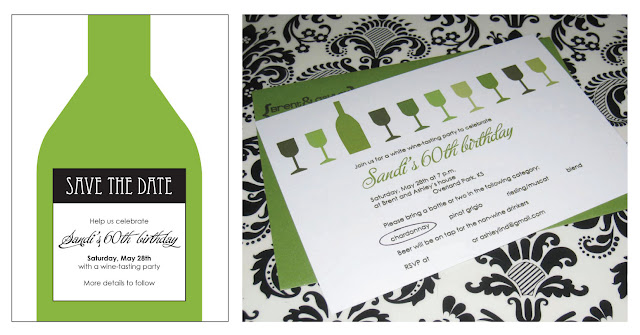 I love green wine bottles – so I used that to set the tone on everything I did.

FIRST GLANCE
Since most of my mom's friends haven't been to my house, I wanted a sign out front. (Well, I would have made a sign no matter what, but at least this time around I had an excuse). 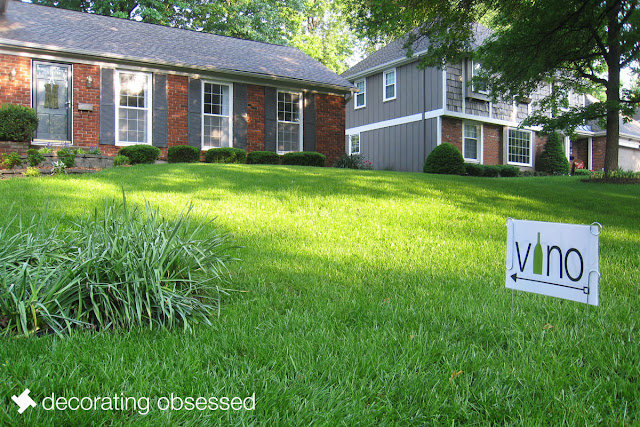 THE STATIONS
We had four different stations set up around the house – chardonnay, pinot grigio, riesling/muscat and blends.

Aside from wine, each station had a wine opener, notepad, pen and napkins. 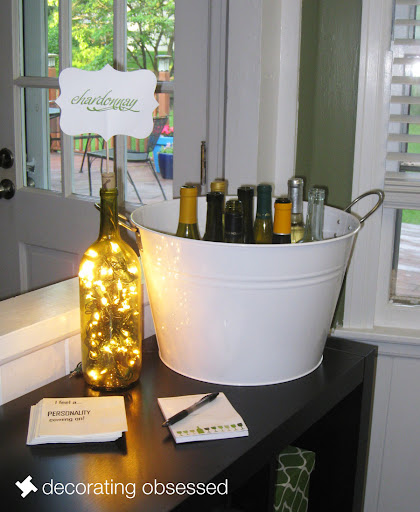 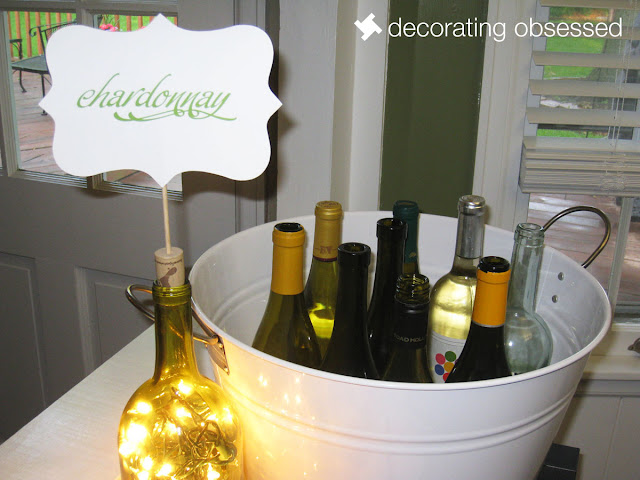 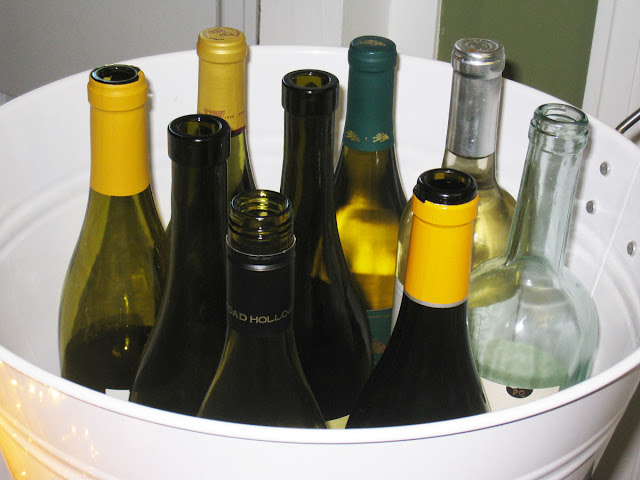 I designed the notepads, and then had them printed at VistaPrint. 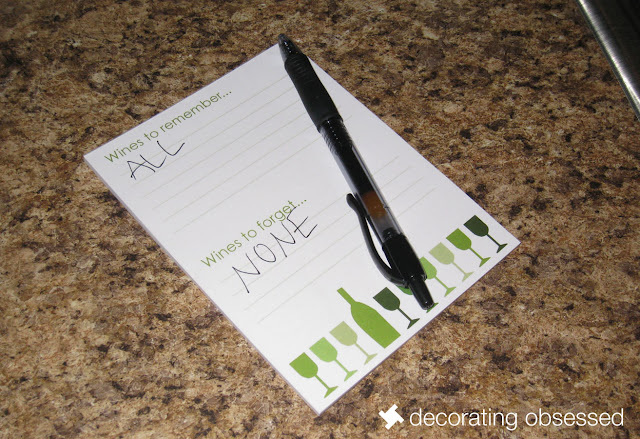 Originally, I was going to get napkins with wine phrases on them, but when I saw these, I just couldn't resist. 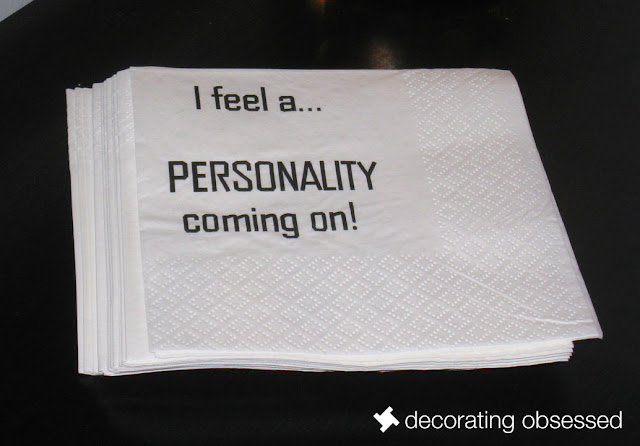 For the station bottles, Brent drilled a hole in each one then we stuffed Christmas lights in them. (Just a warning – after 5 hours of being on those bottles got super hot, so we turned them off). As for the top part, I used a Silhouette.

We also had beer on tap for the non-wine drinkers. Brent and I definitely underestimated that amount of people we had in that group. The pony keg was finished off in about 4 hours, then that group moved on to mix drinks.

THE CHEESE BAR
Wine and cheese – it's a match made in heaven, so of course a cheese bar was a high priority for me. There were 9 different types of cheese, 3 different crackers and some fig spread, which went great with the Manchego cheese. 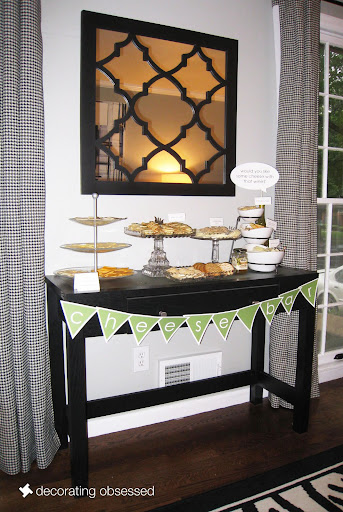 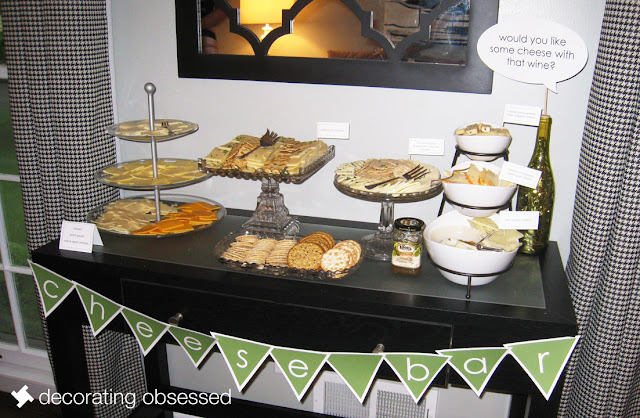 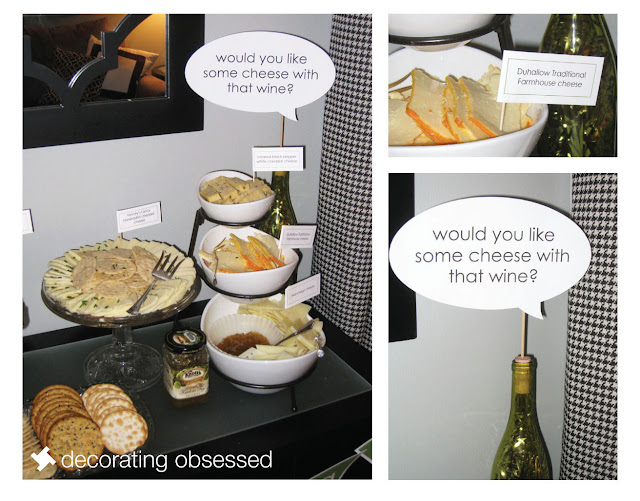 THE FOOD
I love appetizers at a party, and I can't see myself ever breaking away from this. Some of my mom's friends helped me out and brought appetizers as well, which made getting everything ready on Saturday so much less stressful. 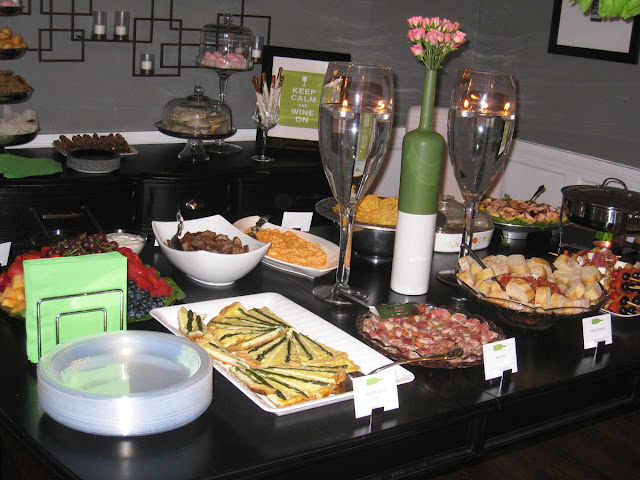 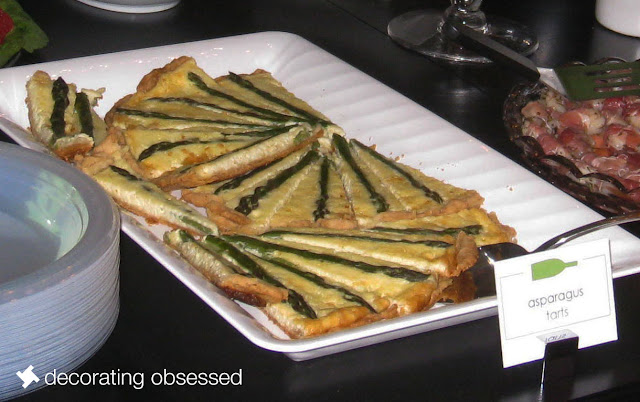 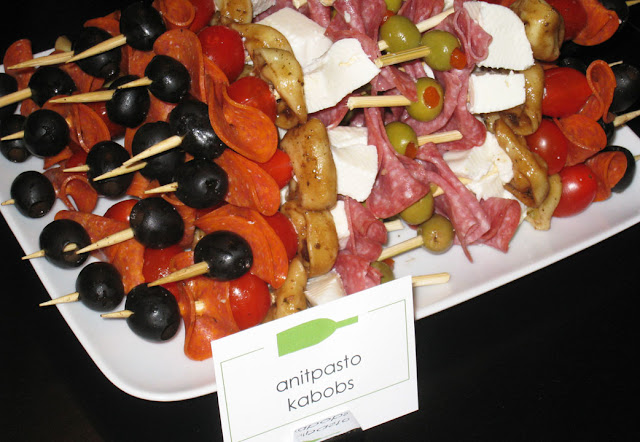 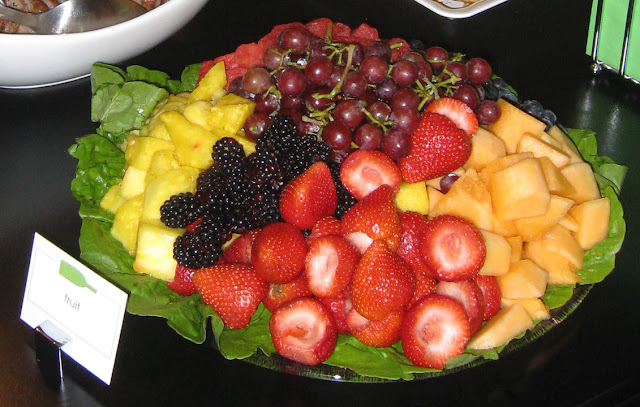 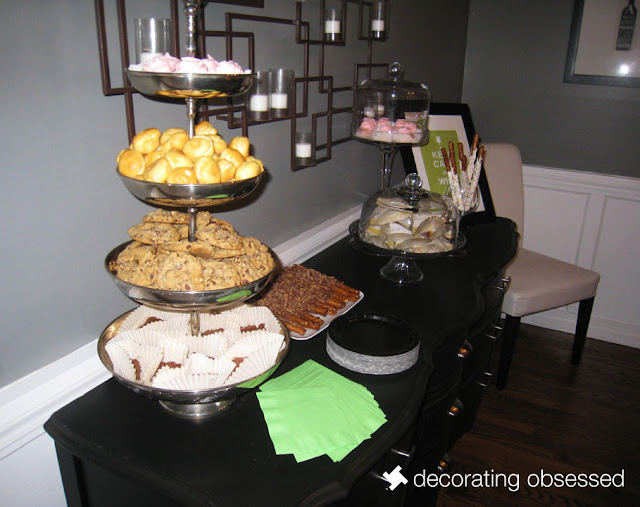 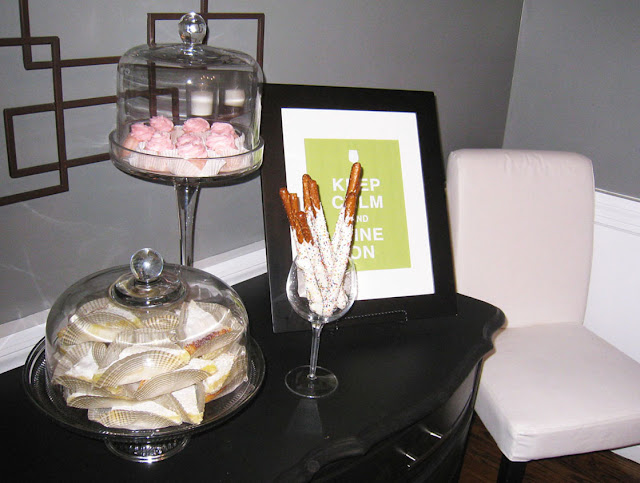 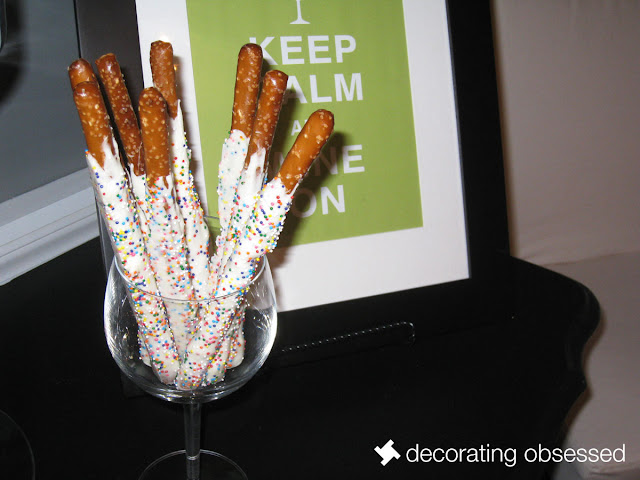 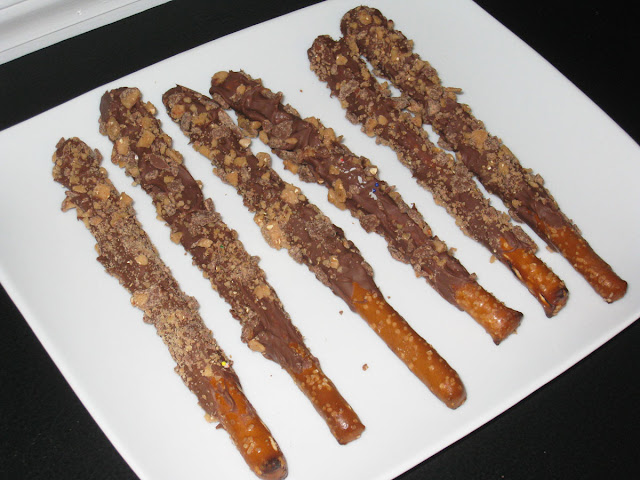 The phrase that pays: 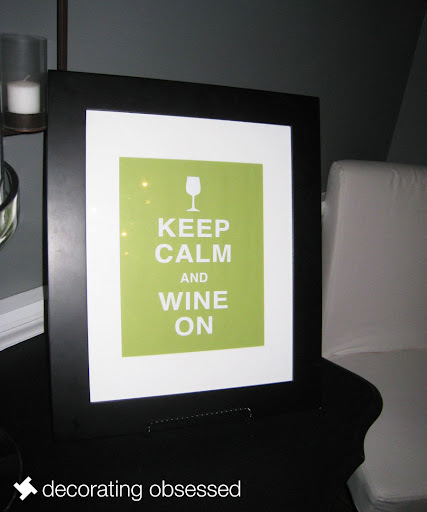 PERSONAL TOUCH
I wanted to display pictures of my mom without making a huge production out of it (my mom would not like a picture wall). So, I cleaned off some wine bottles, created picture labels and placed them throughout the house. 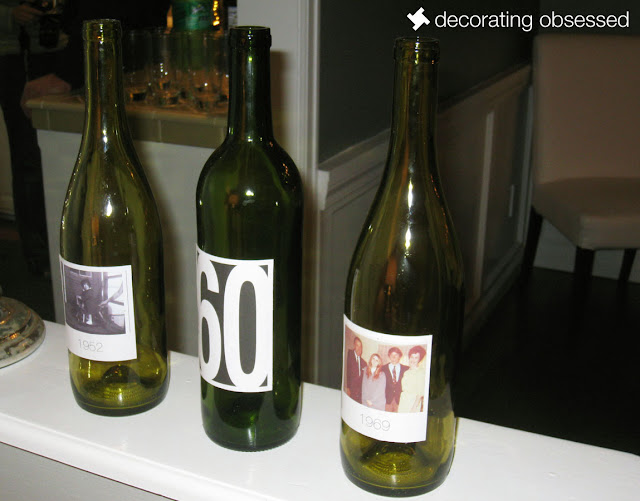 I thought the party turned out great, but most importantly, my mom had a blast.

I hope to have the wine-party paper package available soon!
Posted by Ashley @ Decorating Obsessed at 6:40 PM